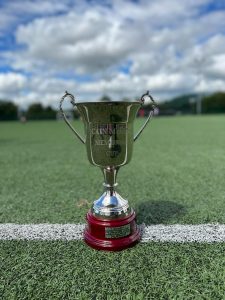 Indigo’s first international ‘Cain McKee Trophy’ memorial match saw an Irish contingent travel over to Wales for a one-off cup game against a Welsh/UK Team. An already existing internal tradition amongst Irish 4site/Indigo staff over previous years, the opportunity arose following the cancelations of Christmas Parties this year, with the aim to make this one extra special.

The plan was to have a full-pitch 11 a side game, with enough numbers to accommodate rolling subs in the interest of poor fitness levels, as well as having 4 x 20-minute halves. But of course, even this didn’t go to plan.

Even before a ball was kicked, numbers gradually depleted with people dropping out for an array of reasons. The ever-present COVID prevented a few guys from travelling over, there were train strikes across the UK, family issues popped up, forgotten and there was even a missed flight!

But nonetheless, the teams were formed, and with the motivation for both teams to bring the cup home and continuing to remember Cain enabled the guys and girls to push through and get the game on!

Due to the circumstances on the day of last-minute drop offs, it was ultimately decided to play a half-pitch game of 7 a side, with 3 x 20 minute halves. This was welcomed by the more unfit people, and there were a few, as the thought of a full pitch game in the heat wasn’t a nice one.

The game was tightly contested, with both teams playing at the same level, which made it a good viewing for the neutral throughout.

The most contentious call of the day came when the Irish Team thought they’d took the lead, only for it to be chalked offside.

Referee Josh Fitton’s explanation was there were not going to be offsides but if you were preverbally “goal-hanging” it wouldn’t count. It was clear that until the next game, the Irish team will be bitter about this call. 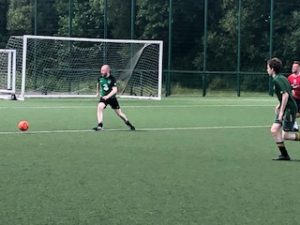 It took a while for the deadlock to be broken, but at the end of the first 20-minute half, a half chance ricocheted through a crowded box following a corner to make it 1-0.

The lead didn’t last long though, and the old cliché of being most vulnerable after you’d scored came true for the UK Team, as Will Tobin took advantage of the UK goalkeeper going for a little wander out of his goal.

The interval saw a lot of red faces, heavy breathing, and some aching legs already, it truly did feel much longer than 20 minutes for some, luckily there were plenty of rolling subs that could get on and off, otherwise the match would’ve probably been abandoned! 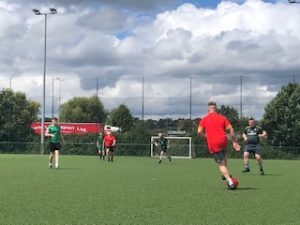 The second half was again very close, until the UK Team slotted in an easy tap-into an empty net following a marauding run from Referee-turned-player Josh Fitton, who decided he wanted a piece of the action!

An increase to the lead came through a cool finish from Callum Hodges who was a standout player throughout.

Going into the last 20-minute section of the game, the legs were starting to go for everyone, many people were counting down the seconds. As the minutes wound down, the UK Team clearly got too confident and took their foot of the gas, with the Irish team having plenty of chances to get back into the game. 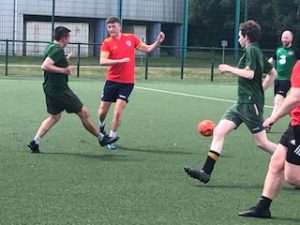 After knocking on the door many times, a glimmer of hope came when the Irish team hit back to make it 3-2. This gave the Irish some extra added motivation into the final minutes, as they piled on the pressure to the tired and sometimes non-existent opposing defence.

The nerves that may have spread through the UK Team were clear, until a clinical finish from the IT’s very own Tom Pope slotted into the corner of the net, which saw jubilant scenes and a few sighs of relief.

With one minute to go, the Irish were still determined and answered straight back again with another goal from the prolific Irish attack up front for Ireland. However, it proved to be too little too late with the UK Team coming out victorious! 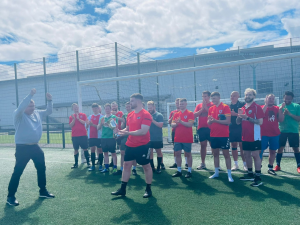 Handshakes and congratulations were passed between both teams, but you had to feel sorry for the Irish team who felt they deserved to take the game to penalties.

The first international Cain McKee Memorial Cup was one to remember for those involved. The last minute issues were not enough to stop the footballers on the day from getting a good match on, and a big thank you to those who played.

Of course, the Staff party followed the match, and whilst the drinks deservedly went down on the night, the debate about that disallowed goal was still a topic of discussion!

We now look forward to the next Football Match, looking to take place in Limerick next year, where there will be a score to settle. But of course, we will continue remember our colleague Cain, and we hope that he would’ve enjoyed the game, and the many games to come. 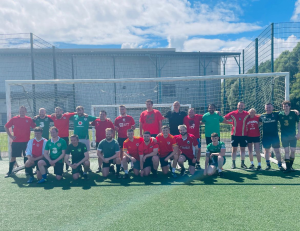